On Thursday last, November 17th, history was made when Gortskehy girls overcame Culleens NS, Ballina and Breaffy NS to win the Mini-7 County Final for the first time. 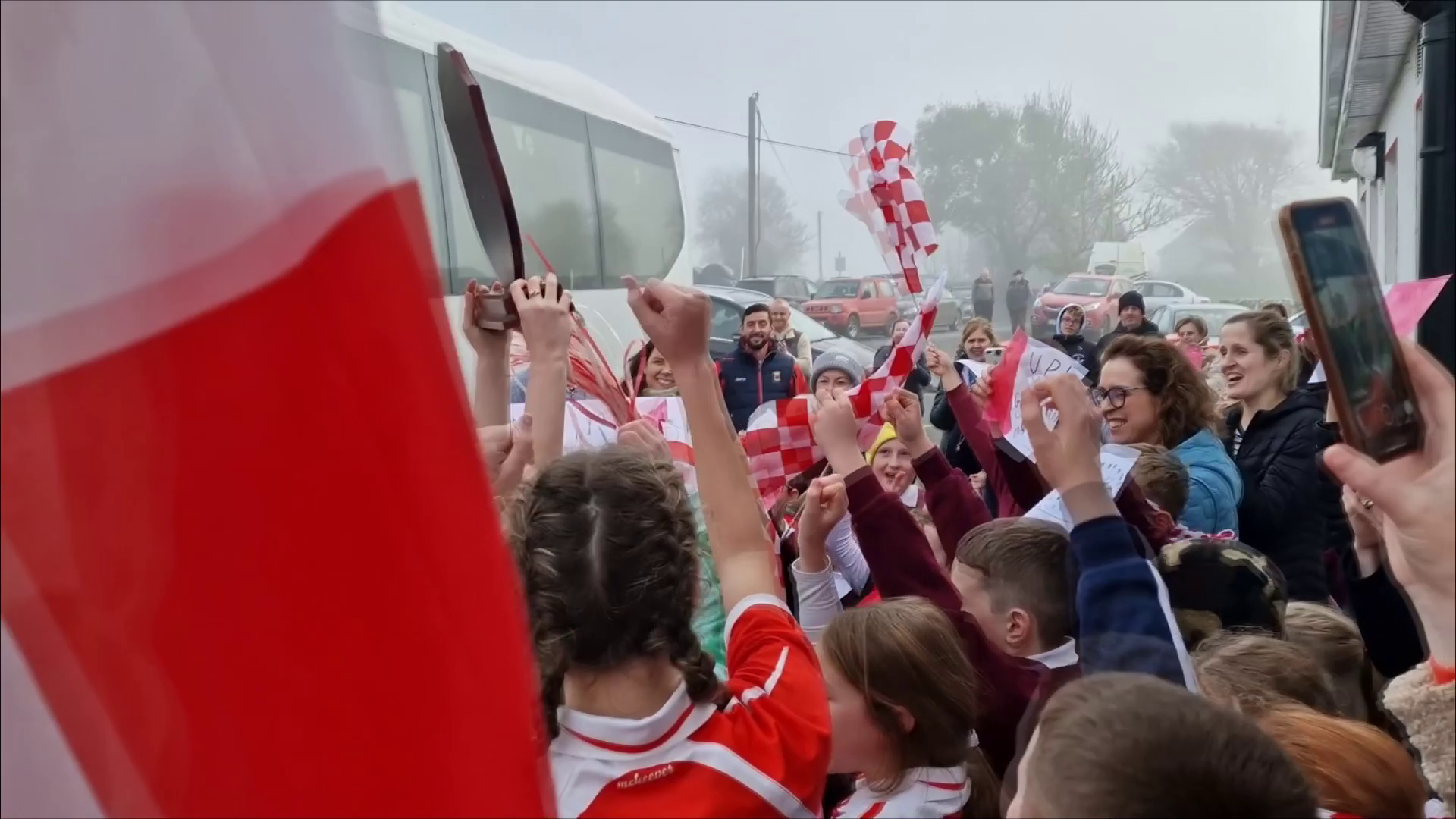 The Dome at the Connacht Centre of Excellence welcomed champions from the four corners of the county who arrived in anticipation of taking home silverware after an exciting campaign which began two months earlier. The semi-final line-up featured North (Culleens, Ballina) vs South (Gortskehy) and East (Charlestown) vs West (Breaffy). 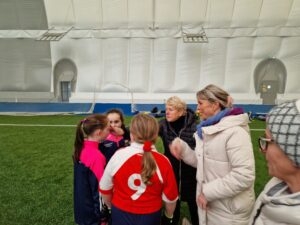 At 11.30am referee John Finn threw in the ball and Gortskehy got off to a great start with Holly Hession knocking over a point followed shortly afterwards by a brace of goals from Faye Tierney. Grace Hristova was rarely troubled in goal until a hopeful ball found it’s way past the Gortskehy defence and Culleens fired to the net with a soccer-style shot that any premier league player would be proud of.

This was the only breach in the opening half as Sorsha Jennings and Aoife Hession were dominant on the backline. Holly Murphy took a fine point extending Gortskehy’s lead to five and Holly Hession added another, leaving the half-time scoreline 2-3 to 1-0. 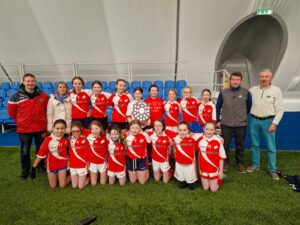 The mark of this Gortskehy team throughout the competition is that they never let their heads go down in spite of adverse momentum and Alaois Doherty, held scoreless up to now, fired home a wonderful goal to tip the balance once again in Gortskehy’s favour. Culleens responded with another goal to restore their lead but Alaois dominated the closing stretch with a brace of goals to secure a hat-trick and a hard-fought win for Gortskehy.

Culleens had won the second half by two points but the first half Gortskehy blitz proved decisive as they progressed to the final on a scoreline of 5-4 to 5-0.
Gortskehy: Grace Hristova, Sorsha Jennings, Aoife Hession, Alaois Doherty (3-0), Faye Tierney (2-0), Holly Hession (0-3), Holly Murphy (0-1). 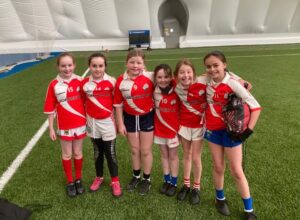 The other semi-final saw Breaffy overcome Charlestown and, at 12.30, John Finn began the County Final with Holly Hession opening the scoring by bagging her first goal of the day. Breaffy responded with two points before Holly Murphy slotted home a goal with a fine shot that smashed in off the post. Breaffy finished the first half by tapping over a point to leave the half-time score Gortskehy 2-0, Breaffy 0-3.

Goals were shared in the opening minutes of the second half with Alaois Doherty keeping Gortskehy in front. Faye Tierney extended the lead by splitting the posts but Breaffy responded with a couple of fine points to leave just two between them as the game approached full time. Sorsha Jennings and Aoife Hession were busy on the back line as Breaffy came in search of a goal that might snatch a late victory. Following a clearance out of defence, Alaois Doherty won a free which she calmly slotted between the posts. The quick kick-out was won in mid-field by Faye Tierney who soloed past two attempts to stop her before blasting the ball over the crossbar which left Gortskehy now four points up. 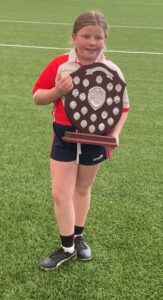 As John Finn blew the final whistle, rounds of applause and cheers rang out beneath the Dome. The girls were congratulated by supporters, young and old, who saw Billy McNicholas, Mayo GAA Games Manager, present captain Grace Hristova with the County Shield before her team members received their medals.

Celebrations continued on the way home with a trip to Supermacs in Ballindine for a much needed meal. The welcome the team received back at school was a sight to behold with bonfires lining the route and a sea of red and white to greet them as they got off the bus. The whole community is so proud of our girls who made history on November 17th, 2022. 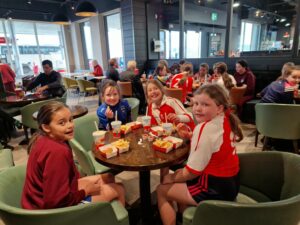 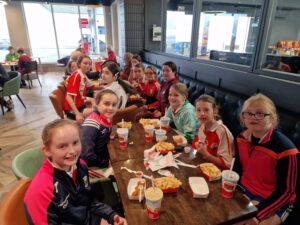 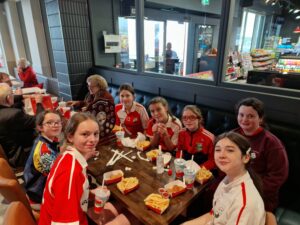 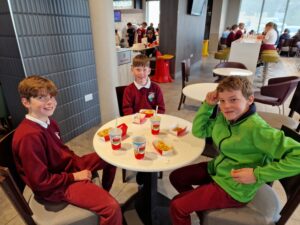 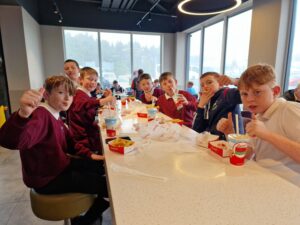 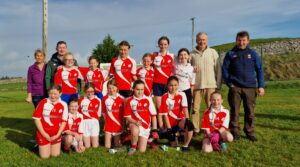 Congratulations to our Gortskehy girls who overcame an excellent team from St. Joseph’s NS, Ballinrobe, in a thrilling encounter this morning at Kilmaine GAA grounds. Having all the hallmarks of a competitive county quarter final, Gortskehy got off to a good start with points from Alaois, Faye and Holly. Ballinrobe bounced back with two goals while Gortskehy narrowed the gap to the bare minimum as half-time approached. A fine point from Ballinrobe left them two points ahead at the interval on a scoreline of Gortskehy (0-5); Ballinrobe (2-1).

Gortskehy had the better start in the second half with Alaois splitting the posts for a fine point and Ciara blasting to the net at the end of a great passing move. Ballinrobe responded with two points to leave the teams level midway through the half. Alaois found the net and Faye tapped over from a free while Ballinrobe again scored a goal and, with a minute to go, lofted over a point to leave the teams level on the brink of full-time.

In what was to be her final kick-out of the game, Grace sent a long ball down the center where, despite two markers and a scramble for possession, Faye came away with the ball finding Alaois with a well-placed pass. Alaois held her composure to send over the winning point before the welcome shrill of the final whistle was greeted by loud cheers from jubilant Gortskehy supporters made up of pupils and parents alike. It was a fantastic match and an excellent display of football by both teams.

Grace had a fine game in goal with excellent kick outs, Aoife and Sorsha were tireless on the back line with Sorsha blocking at least one certain goal as full time approached. Alaois and Faye were once again exceptional at mid-field with Holly M and Holly H performing very well against a strong Ballinrobe defence. Ciara made a match-winning contribution when she joined the fray in the second half with the final scoreline Gortskehy (2-8); Ballinrobe (3-4).

Both the county semi-final and final will be played in The Dome at the Connacht GAA Centre of Excellence on Thursday, November 17th. It’s the first time the school has reached this stage of the competition and we’re very proud of all the girls.

Team and panel: Grace, Sorsha, Aoife, Alaois (1-3), Faye (0-2), Holly M, Holly H (0-2), Ciara (1-1), Caitlin, Daphny, Niamh, Ailbhe, Zara.
Because of age restrictions in the Mini-7 competition, Alisha, Aoibhínn and Niamh couldn’t take to the field but are an integral part of our training and match preparation. 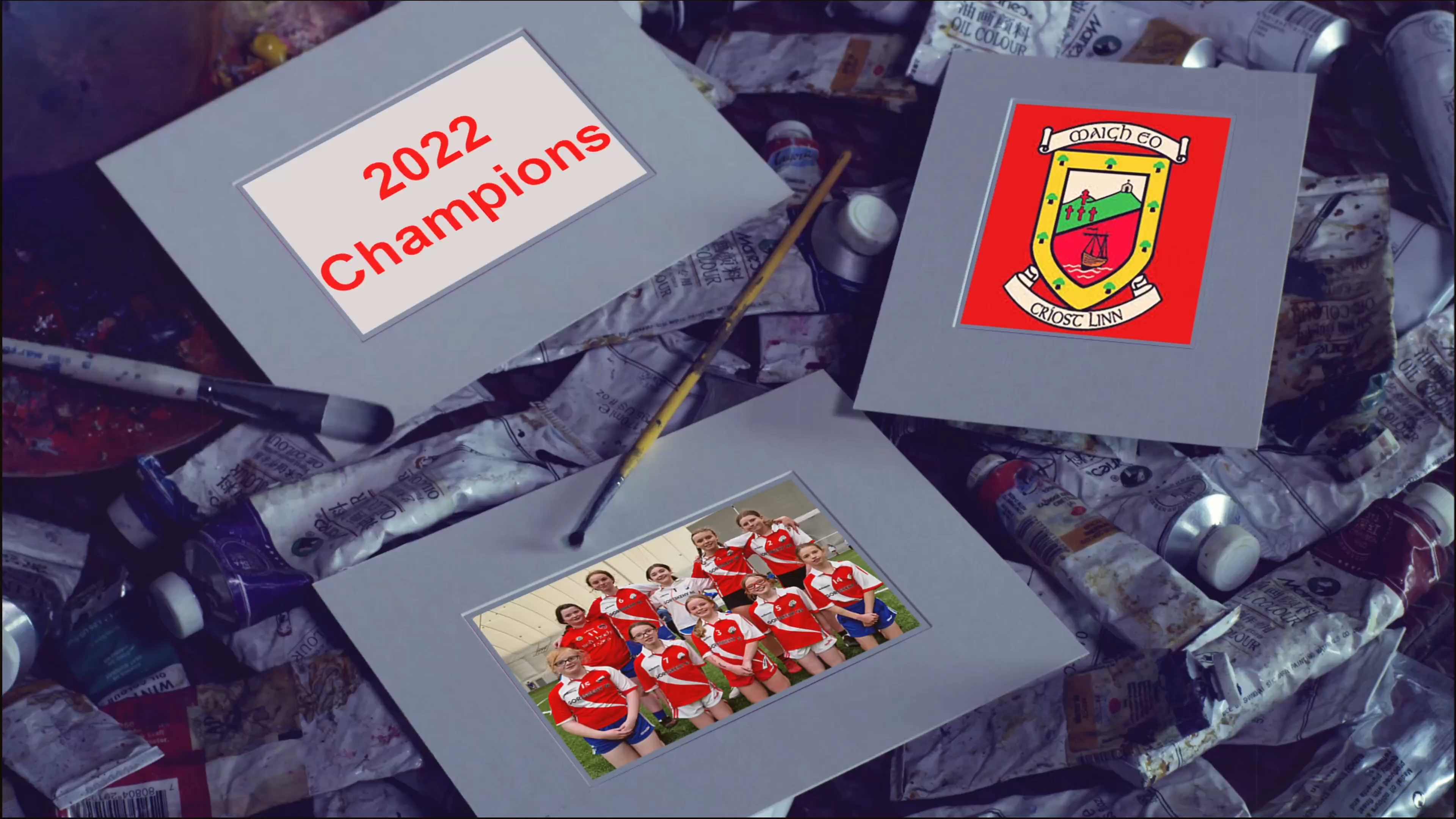 Gortskehy overcame Ballyhaunis and Irishtown/Meelickmore to meet Balla, as the winners of Group B, in the semi-final. Barnacarroll and Knock faced off in the other semi-final with Gortskehy and Knock progressing to the final stage.

Grace played fantastic in goal, making a number of key saves at crucial times in the game. Aoife and Sorsha commanded the back line while Faye & Alaois were excellent in mid-field. Alaois fielded some superb high balls matched with fine scores while Faye’s relentless marking of Knock’s key player was instrumental in Gortskehy gaining the upper hand.

The movement of Holly H on the forward line left her marker struggling to keep up and unable to prevent Holly taking a number of excellent scores. Holly M gathered a number of key balls, laying them off to our runners, and taking some fine scores herself, rasping the crossbar on one occasion. Gortskehy ran out winners on a scoreline of 7-7 to 4-4. Niamh, Aoibhinn and Alisha completed the panel but, because of age limits in this competition, they couldn’t join the field of play on the day. 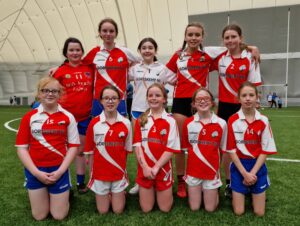 The girls will now represent South Mayo in the County Quarter Finals in November. The last time the school enjoyed such success at this level was in March 2012 when an amalgated team of Gortskehy/Meelickmore won the South Mayo Final. The Gortskehy panel at that time included, Nicola Hession, Diane Tierney, Orla Beddows, Marie Mulhern, Amy Frizzell, Rachel Hession and Rebecca Flanagan. A video of that presentation can be viewed here.

We cannot forget the boys who were also group winners, defeating Ballyhaunis and Irishtown/Meelickmore before meeting Balla and being beaten by the narrowest of margins in the semi-final (5-6 to 5-7). Following their win, Balla went on to overcome the Gaelscoil in the boys’ final. Our boys didn’t let their disappointment impact the joy and celebrations led by the girls. We are so proud of them all. It was a fantastic achievement and we look forward to the county finals in a few weeks’ time. 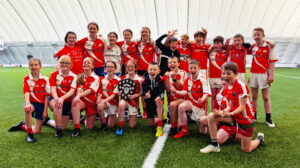 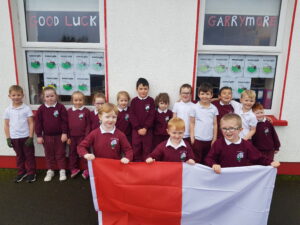 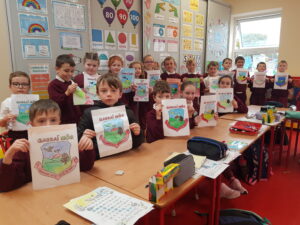 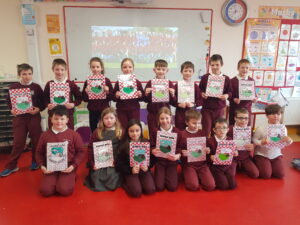 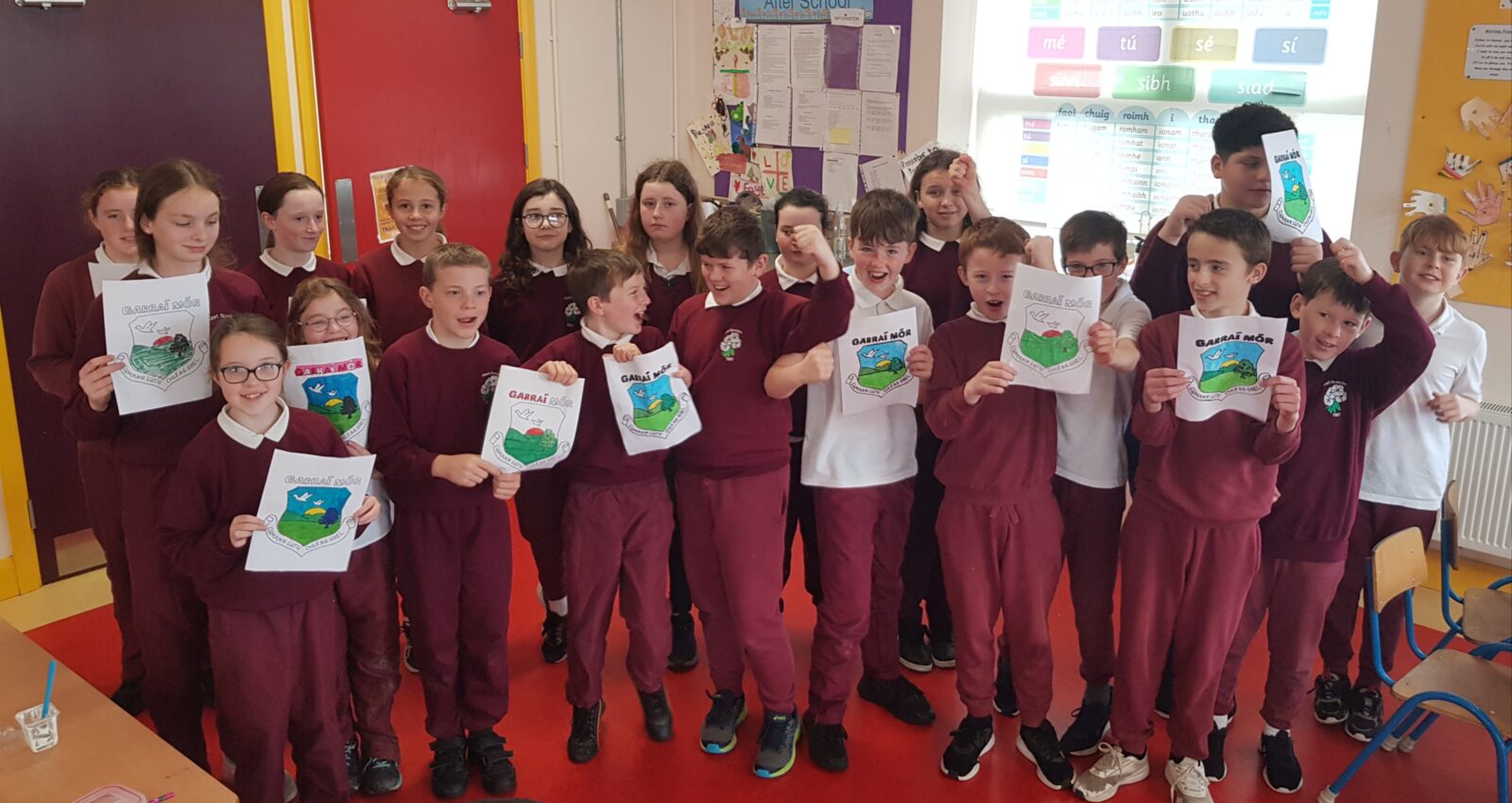 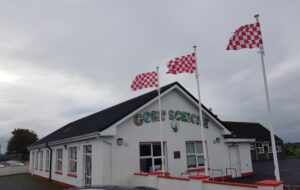 Creative Schools Week is a celebration of creativity in schools which includes both In-School Celebrations and Online Celebrations. The week is an opportunity to share, showcase, and connect all the exciting creative work that is being undertaken in participating schools around the country.

Gortskehy NS was selected to participate in the pilot phase of Creative Schools in 2018 and since then, we have have enjoyed many opportunities for our pupils to build their artistic and creative skills; to communicate, collaborate, stimulate their imaginations, be inventive, and to harness their curiosity.

This year, our school submission, featuring the 3rd and 4th class radio show was selected by the Arts Council to feature in the 2021 Creative Schools Online Celebrations.

The Online Celebrations will feature on the Art’s Council website here, from  Wednesday May 12th to Friday, May 14th.   Gortskehy NS and the Radio Show  will feature in Episode 1, which will launch on Wednesday, May 12th.  We are inviting parents and families to tune in to view the celebration on May 12th.

Congratulations to Ms. Thomas and the talented pupils of 3rd and 4th class on this fantastic feature –  a wonderful achievement.