Our senior room have been lucky enough to pair up and become pen pals with pupils from 5th & 6th class in SS Peter & Paul Primary School near Wellington New Zealand. In preparation for this each child had to research New Zealand and create a presentation for this. Following completion of this project each class member shared their presentation. Last Wednesday the 28th of November after a very exciting wait we received our letters and learned the name(s) of our new pen pals. Some of our class were lucky enough to get two pen pals. All of the senior room had the opportunity to share their letter with the class and prepare their replies. Following the sharing of our letters we learned that the schools in New Zealand are very similar to us in many ways and have a very similar school day. Some big differences we noted were the weather, seasons and school holidays. Our pen pals are approaching their summer holidays now and getting excited for the break. We were very excited to send our first reply today and really enjoyed learning new information about our pen pals and life in New Zealand. 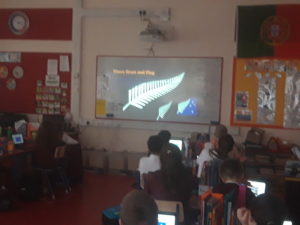 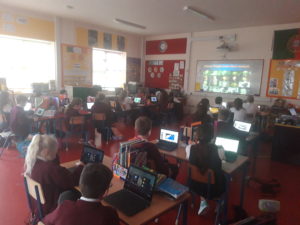 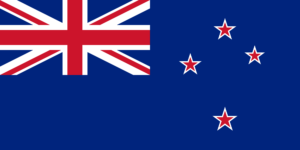 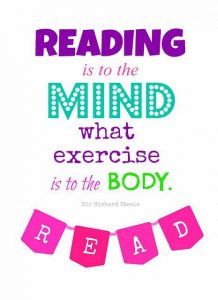 Our Reading Buddy program is an initiative where older students participate in a paired reading activity with younger students.

This year, pupils from 4th/5th/6th classes (Big Buddies) were paired with pupils from 1st and 2nd classes (Little Buddies).  The pupils meet twice a week for 8 weeks.  Each week, the pairs & small groups read aloud to each other, benefiting both students reading & listening skills.

The ‘Little Buddies’ benefit from:

The ‘Big Buddies’ benefit from:

Reading Buddies can promote a higher interest and participation in reading, improvement in social and communication skills.  And, most importantly, it’s just FUN!

Here are some pictures of our buddies in action! 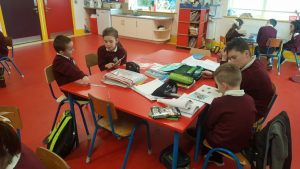 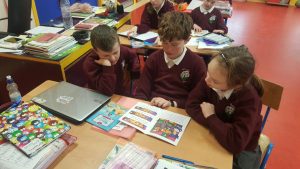 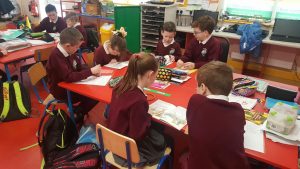 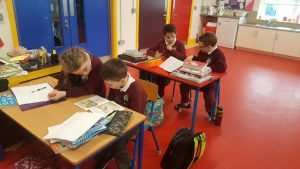 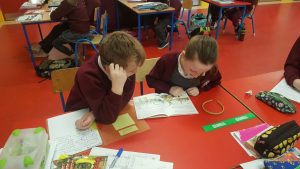 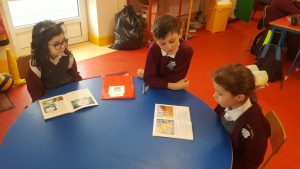 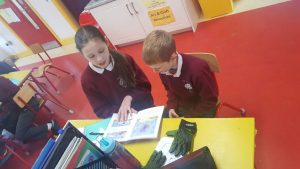 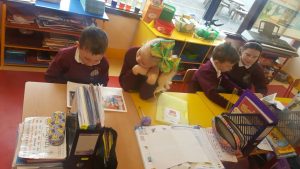 Over the past few days we’ve had five online meetings with our partner schools in France, Croatia, Portugal, Lithuania and Austria. We sang Silent Night in Irish, English and played it on the tin whistle. The other schools also sang Silent Night in their native language. We asked each other questions about Christmas in each country and played an online card game where we had to try and find the matching Santas.  Everyone from Infants to Sixth class took part. It was great fun. 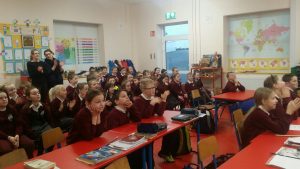 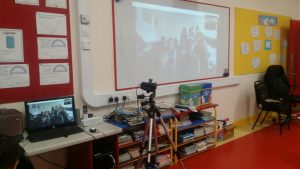 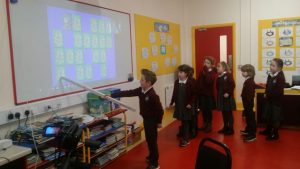 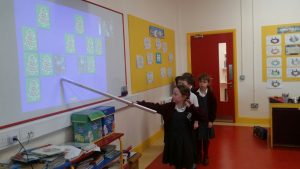 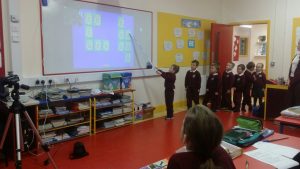 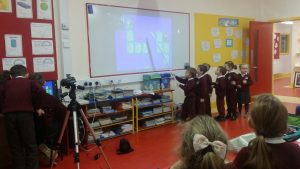 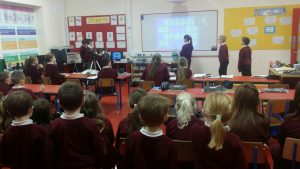 The story of a girl and her lost dolls

Once upon a time there lived a girl named Aoife who was getting ready to move house. She was packing the last of her things when her mother called her. “Come downstairs Aoife, dinner is ready” her mother shouted. Aoife came thumping down the stairs. Half an hour later Aoife went back up the stairs as she was finished her dinner. She went into her room to pack up her dolls, well any of the dolls that she could find. 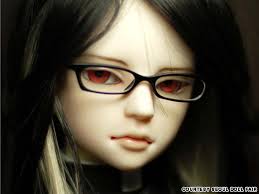 Two years before she had lost a doll but she didn’t care because it was her least favourite. Aoife didn’t even look for that doll. She started to walk over to where she had left them but they weren’t there. She didn’t care, then she muttered “I don’t care about losing the dolls because they will just take up space in my one of the suitcases”. Aoife went over to her bed and started to read a book. Eventually she got tired and fell asleep. Then,  suddenly, Aoife heard her cat Lala meow. Aoife awakened at once. She turned her head to see what was the matter. She saw the cat and all of the dolls including the old doll that was lost years ago. The state of the dolls scared Aoife the most because their eyes were red.

The dolls had become evil. They were angry with her for forcing them to live in a box and tying up their hair in really tight hair styles. The long lost doll was the most angry with Aoife because she didn’t like how Aoife always lost her. They were planning to cast a spell on her when Lala (Aoife’s cat) walked in. Lala started to meow at the sight of the dolls. Aoife woke up when she heard her cat’s meow. She turned her head and saw the dolls. She ran down the stairs as fast as her legs could go.

Aoife told her mom about the dolls so they moved house earlier on than planned that day and left the dolls behind. But that didn’t stop the dolls. Soon the dolls found Aoife’s new house. They climbed the  wall of the house and got in through the window. They went under the bed and waited for Aoife. When Aoife entered her room, one doll came out from under the bed and locked the door. Aoife became very afraid. She screamed but no-one heard her. The dolls tied her hair up in a tight bun. Aoife didn’t like that. She said that she was very sorry. Aoife also stated that from this day on she would only be nice to them and brush their hair lightly. The dolls were satisfied with that and let Aoife brush their hair again. Aoife kept her promise and lightly brushed their hair. She then went downstairs.

Ella burst into a rage and ran upstairs then, for no reason at all, she fell asleep. The dolls were extremely mad at Ella so they cast a spell on her while she was asleep. Then Aoife’s sister Ella went upstairs. She saw Aoife’s dolls. Now Ella was only two years old so leaving a pair of scissors where she could find them wasn’t a great idea. In fact it wasn’t a great idea at all. Ella saw a pair of scissors on Aoife’s dressing table. Ella picked the scissors and started by cutting off most of the hair on the top of her own head. Next she cut Aoife’s favourite doll’s hair and then the rest of Aoife’s dolls. Ella left the pair of scissors down and went downstairs. When Ella got to the bottom of the stairs her mom saw her hair. Ella’s mom brought her to a hairdresser. They went inside and the hairdresser saw Ella’s hair. The hairdresser ended up shaving every last hair on Ella’s head. Ella used to have very long hair for her age, it used to reach the bottom of her back, and now she had none. They went back to their house. Aoife saw Ella and laughed at her.

The dolls were now very mad at Ella so they cast a spell on her that not a single hair on her head would ever grow again. Three years had passed and Ella’s hair never grew. Ella was now five years old and had no hair. She was to start school in September, but because of the fact that Ella had no hair, she decided not to go because she would become too embarrassed. 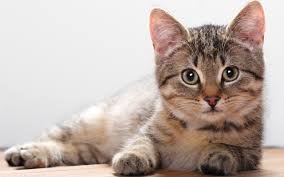 Ella was very jealous of Aoife’s beautiful long hair. Years went by and Aoife’s hair only grew longer. Ella became a hairdresser and Aoife came to her salon. Ella saw her opportunity. In the blink of an eye and with a snip, snip, snip she got the scissors and cut all of Aoife’s hair off. Aoife got very cross with Ella. “I’m sorry Aoife but I became very jealous of your long hair” she murmured meekly.  I had planned on making myself a wig but instead I will give it to your dolls” muttered Ella sadly. “Ella, just how will you give my hair to my dolls?” Aoife asked her sister. ”I’ll make wigs for the dolls“ replied Ella. “But what about the spare hair, you know, the hair not being used on the dolls?” Aoife asked quizzically. “We will donate it to the Rapunzel charity” stated Ella.”What on earth is the Rapunzel charity ?” Aoife asked. “The Rapunzel charity is an organisation set up to make wigs for kids with no hair” replied Ella. That night the dolls got the wigs. Aoife and Ella went to sleep, the dolls had cast a spell on the two young teenagers and the next day they had hair again. The dolls smiled and everybody lived happily ever after.

The Night Of Mother’s Return 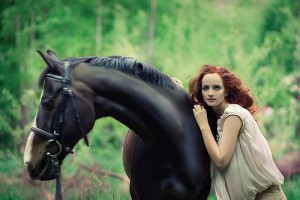 Once upon a time there lived a beautiful girl named Christen. She loved to go to her father’s bird sanctuary. Whenever she went she would come back and say “what marvellous birds they are!” One day her father became very ill with the plague. Christen became worried, her mother had died when she was young and she became very connected to her father. She decided to try and get some medicine for her father in the next town.  She got on her horse, Shadow, and went to the gates. It was illegal to leave the town gates because of the plague so she had to sneak out to get the medicine for her father. She didn’t understand why there wasn’t a medicine shop in that town. She went to the gate and hid until dawn. Christen climbed over the gate and opened it from the other side. She climbed on to her horse and went in search of the pharmacy. After an hour of riding Christen began to feel scared that she wouldn’t get back in time. She was tired and her horse began to slow down. Another hour passed and Christen reached the town but the gate was locked. She sat down and began to cry next to a giant, stone wall. She looked up and saw a sweet, quite short lady looking at her. The lady wiped away Christen’s tears, gave her a handkerchief and walked away. Christen looked at the handkerchief, it said “you can do anything my dear”. Christen knew it was her mother, she got up and tried to open the gate. It opened with a creak.

She went in and she was quite scared. She looked around and saw the pharmacy in the distance. She climbed on Shadow and rode to the pharmacy. When she got there it was nearly sunrise she went in and got the medicine. She described her father’s symptoms and asked the pharmacist how long he had left to live. “I’m afraid he only has twenty-four hours” replied the lady behind the till. Christen was told to leave as they were closed. She sat outside leaning against a new, strong wall. As night fell she set off back to find her father’s house. 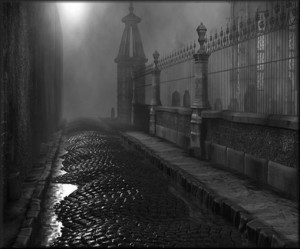 Her own town seemed strange at night. She had to go through dark and dangerous streets but she did it for her father. For about half an hour she roamed through the maze of cobblestone streets. “No wonder it’s called the dark quarter” she pondered. She was glad her horse did not get injured from all the broken street-lamps. She had to hurry if she was to get back in time to save her father. Christian rode as fast as she could. The sun was rising as she reached her father’s house. All of a sudden a deep growl echoed from the gloom. It spooked Shadow. Christen was thrown off her horse, banged her head on a rock and everything went black.

When she awoke she noticed she was in her bed. It was all a dream. She was so glad to see her father was okay. She also saw her mother standing there safe and sound. Every year they celebrate the night of her mother’s return.