Today is the 104th Anniversary of the sinking of the Titanic. Here is a story I wrote based on the event.

As I got out of the car, getting ready to board the Titanic, I felt a sudden gush of excitement. I know posh fellows, like myself, don’t usually act like immature people jumping around the place and breaking everything just because they are excited. That’s why I kept the excitement to myself. Then my mother got out of the car. She was dressed in a delicate fabric dress along with a sun hat to match. She was very into delicates. She had ginger, curly hair, like myself, and, don’t tell her that I said this, but her hair was piled up to the top of her head like a bird’s nest! Then my father got out of the car and gazed at the ship. He had black hair with a black moustache and was wearing a grey suit with a black tie, a pink shirt and shiny black shoes –  weird choice, right?  When we got all thirty-six, ten-kilo bags out of the eight cars, we started to queue for first class. 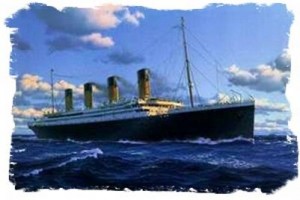 We waited for a whole THIRTY minutes before we got on board! I thought I would completely ‘lose it.’ A few crew members had to help us load all of our luggage. When we got to our cabin I looked around with awe. It was beautiful. It was one of the biggest, most elegant cabins on the ship! There was furniture made of gold, two king-sized beds and giant plants with tall flower pots. When I finally snapped out of it, my family and I started to unpack. While I unpacked our valuable treasures, my mother hung up some portraits and, as for my father, well, he went haywire exploring the ship.

When we finally finished unpacking, Daddy came rushing in with a flurry.  He then caught his breath and told us why he was so excited. Apparently, there were lots of cinemas, restaurants and spas around and lots of other features. There was even a deck pool! I then went out to explore. I bumped into a boy named Jack. The way we met was, well, kind of strange. But let’s NOT get into that right now! At that moment, I could sense that my mother was looking for me so I said I had to go back to my cabin. But, before I left, I invited him to dinner that night with my family.

When we got to our restaurant I met Jack and we sat down. My family and I ordered our food and had a little chit chat. When our food was laid on the table, it smelled lovely. I ordered a beef steak with vegetables and potatoes. Jack ordered a cheeseburger with chips. My family looked at him like he was a crazy person. I don’t think he yet understood the concept that we were posh, as well as rich, and we never, ever ate fast food. Anyway, we all enjoyed our meal very much. I went back to the cabin to have a ten-minute nap afterwards. 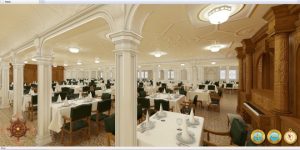 In the middle of my nap, I heard a huge bang! crash! scrape! It sounded like the ship had been picked up and dropped back on the ocean. I jumped out of my bed and rushed out of the cabin to see what was going on. I bumped into one of the crew members handing out life jackets. He gave one to me and ordered me to put it on right away. I still had no idea what was going on so I pulled the crew member back and asked him what on earth was going on. He said that the ship was sinking. That was what changed everything. I found my mother getting into a lifeboat and my father waiting. Apparently, women and children first, then the men. My mother tried to get me onto the lifeboat but I refused because Jack was missing. Other women began trying to persuade me to board a lifeboat, but I still refused. I then ran off to find Jack because I wasn’t leaving without him. I ran into the ship and heard Jack shouting. He was trapped in a cabin below deck. I grabbed an axe that was on display. I smashed the door open and we got back up and out on the deck as fast as we possibly could. There were musicians playing sad music trying to calm the mood but, of course, it didn’t work as people were still running around like headless chickens. My mother’s lifeboat then left. Mother started crying as she left and begged the crew member to turn back. The boat kept going forward.

Soon after, an SOS signal flare shot up into the sky like a scarlet firework. I was starting to panic. Two hours later, I heard the biggest crash ever! Apparently, the ship had split in two. Jack and I were at the bow of the ship which soon began to tip over. We held onto the front bars for dear life. When the ship went down we let go of the bars. The water was freezing. Jack got me a door to lie down on so I wouldn’t get too cold. During the night Jack kept hold of the door beside me, until he died of pneumonia. He let go of the door and drifted slowly down, deep into the Atlantic Ocean. Then a half-empty lifeboat came back. I tried to raise my voice and call it over to me but they didn’t hear. Then I spotted a drowned officer floating about two metres from me and he had a whistle. I paddled over, took the whistle and blew it as loud as I could. The half-empty lifeboat turned around and started coming towards me. 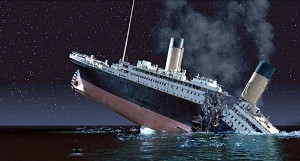 After ten minutes of rowing we spotted a ship called the Carpathia coming towards us. When I got on the ship, I was given blankets. At that moment, mother started hurrying towards me. I could see her but she hadn’t yet spotted me. I didn’t want to face her at that moment right after refusing to get on the lifeboat. It seemed like she was looking for someone. I overcame my hesitation, ran to her with open arms and gave her a big bear-hug. I’ll never forget that terrible night.

Based on the diary entry of Rose DeWitt Buckater, 15th April 1912.