The Maginot Line was a long line of walls, forts, and armed defences that the French built after the First World War to prevent a future German invasion of France. The plan was that the French army would have time to get ready and go north to Belgium and win any battle with the Germans there. The French thought it would be a great idea. The defences did not extend through the Ardennes Forest because the French thought the Germans would never be able to break through the forest. But they did. In the Second World War the German army and French army met in Belgium. The Germans circled around the wall and attacked. The wall was no match for the German tanks, machine guns and air fighters coming from all around it. The Germans were way too strong for the French. The Maginot Line didn’t prevent the German defeat of France in World War 2. 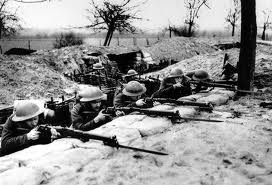