The Basilique du Sacré Coeur is a Roman Catholic church and a Minor basilica dedicated to the Sacred Heart of Jesus. It is located in Paris on the top of Montmarte, which is the highest point in the city.

It was built in 1875 and was built with the direct involvement  of  the Third French Republic to mark the foundation of the new French State whose laws were enacted that  year.

It took forty-four years to build as it was officially finished in 1919. Paul Abadie designed it but he passed away in 1884, when only the foundations were laid! Lucien Magne then took over. He only added an 83 metre tall clock tower. 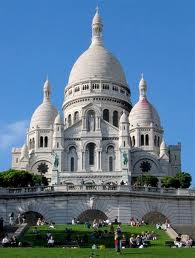