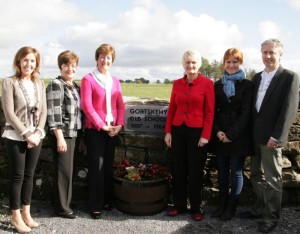 MEP for Ireland North and West Marian Harkin has paid tribute to rural national schools and has said everything must be done to ensure that they continue to provide a service to their communities.

Ms Harkin made her comments when she unveiled a plaque earlier this month to mark the 125th anniversary of the founding of Gortskehy National School in South Mayo. She said she had been hugely impressed with the school’s achievements over the past number of years. “Before I visited, I was extremely impressed with the school’s website which lists its students’ achivements and progress in areas as diverse as sport and film, participation in the Cross Border Orchestra and the Young Scientist Exhibition in 2012”, Harkin noted.

“When I visited the school itself,” she added “its energy and dynamism was so obvious – the bright colourful classrooms; the beautifully kept grounds; the enthusiastic, confident boys and girls; the committed parents and the dedicated teachers; all combining with the wider community to deliver a world-class education.”

On the day of Harkin’s visit, the school welcomed teachers from Turkey, Romania, Austria, France, Italy, Estonia and Hungary – collaborating on a Euro-project entitled “Follow our Footsteps”.

The Independent MEP said that “the sense of being rooted in the Community and the continuity of doing so for 125 years, the linking of the past and the looking forward to the future clearly showed the hugely valuable contribution that small schools can make to any Community”.

Ms. Harkin said “the Minister for Education, Mr. Ruairí Quinn T.D., should be very wary of closing small schools in rural areas. The Minister for Education should visit schools like Gortskehy before he speaks of a ‘critical mass’ or ‘value for money’ in relation to the closing down of smaller schools. Having visited Gortskehy, I am absolutely convinced that the children attending this school will leave their primary education fully equipped to make their way in the wider world, proud of their local area, full of confidence, following a first class Primary Education”.